Click to see a copy of the CONTRACT for a herdsire breeding. If you would like to buy Logan, click to see a contract to PURCHASE A PROVEN STUD With purchase, Logan will have a health and breeding soundness exam at Washington State University to make sure he's good to go. If he's not, the contract is voided and no money is lost by you.

Logan has produced a VERY pretty little girl cria with Finneana. The cria, named Eilonwy, is medium fawn with rose gray on her legs, white socks, and a big star on her forehead.

Logan inherited the bright crimpy fleece and beautiful head of his magnificent sire, Accoyo America Diomedes (was at Grazing Hills Alpacas, sold to a Canadian farm, now deceased). Nice, square conformation. He's a handsome guy and the hulkiest boy on our farm . . . a BIG boy! He is in the 175 lb range. He has a rather shy personality.

Mom has thrown in her dark fawn color and darker markings on the face. Logan made us proud of his placing in his first showing at NW Alpaca Showcase.

When purchased, Logan comes with a reproductive guarantee and breeding soundness exam included before his sale (at WSU by Dr. Tibary & staff). Free board for 1 month. Free delivery within 100 miles.

2009 NORTHWEST ALPACA SHOWCASE HALTER JUVENILE DF MALES:
4TH PLACE OF 10 ENTRIES, 6 PLACEMENTS; WE WERE VERY PLEASED TO BE IN THE RUNNING AMONGST THIS GROUP!
Purchase Terms

We realize everyone's situation is different and we are willing to draw up terms agreeable to both parties. Don't hesitate to ask for a plan that works for you. 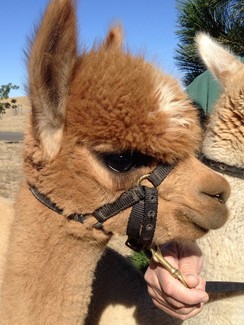